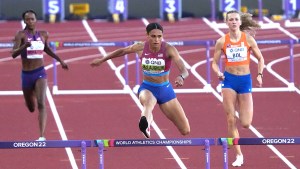 In 1974, when I was a sophomore track walk-on at the University of Kansas, I took smug satisfaction that my best time in the one-lap hurdles was superior to the women’s world record.

Krystyna Kacperczyk of Poland ran 56.51 seconds for the 400-meter event that summer. My personal record: 56.1.

When I eye-witnessed Nawal El Moutawakel of Morocco win the long hurdles during its Olympic debut at the 1984 Los Angeles Games, I was chagrined to see the 22-year-old go much faster — 54.61 (albeit over 30-inch hurdles; my 10 barriers were 36 inches high).

Now how should I feel upon seeing another 22-year-old — New Jersey native Sydney McLaughlin — collapse the world record Friday to 50.68? (See results here.)

The media had been admonished before the World Athletics Championships in Eugene, Oregon, not to show national preference or make any outbursts.

I think I’ll be forgiven.

Now the experts on the Track & Field News message boards are saying McLaughlin’s mark deserves its own adjective.

Beamon’s jump should now be described as Sydney-esque, one said.

Others rushed to react.

“The women’s event has fully matured,” he said.

Another said: “I think Beamonesque is the closest analogy. Except that I feel SM is more likely to do even better in the future than Beamon ever was.”

McLaughlin delivered on expectations by setting her second world record of 2022 and fourth in the past 14 months.

Sydney McLaughlin slapped her face before starting her record run in lane 5. Photo by Chris Stone

As silver medalist Femke Bol of Holland recovers behind her, Sydney McLaughlin is congratulated by U.S. teammate Britton Wilson, who took fifth. Photo by Chris Stone

Sydney McLaughlin has more records in the tank, including the 400-meter dash, some said. Photo by Chris Stone

Before the final at 7:50 p.m., 100-meter gold medalist Fred Kerley tweeted his prediction for McLaughlin: 50.8 seconds.

Trying to put 50.68 into perspective, others quickly noted that McLaughlin’s mark would have taken seventh in the women’s 400-meter dash final held only 35 minutes earlier.

Her time — over hurdles — ranks among the top 20 this season in the world for the flat lap (with no hurdles).

As recently as 1953, her time would effectively have been a men’s world record.

On the unofficial Mercier-Rioux Scoring Tables, 50.68 is equivalent to a men’s 400 hurdles time of 45.2 seconds. (The actual men’s world record is 45.94 by Norway’s Karsten Warholm at the Tokyo Olympics.)

For her efforts, McLaughlin was immediately awarded $100,000.

That prompted one wag to write: “I got excited to see the $100,000 check, then realized the Saudis just gave a washed up, can never win again, golfer $175 million to play silly golf 8 times a year on TV. Sad.”

I’ve shaken hands with novelist Ken Kesey, interviewed Wilt Chamberlain and had my head rubbed by the Dalai Lama. Those were pedestrian moments by comparison.

Now I’ve seen a true Wonder Woman explode limits for her or any other sex.