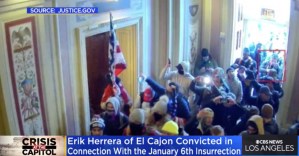 Erik Herrera, right in the red square, as seen in court documents regarding his role in the Jan. 6 breach of the Capitol. Photo credit: Screen shot, CBS Los Angeles

A federal jury convicted an El Cajon man Friday for his part in the breach of the U.S. Capitol building on Jan. 6, 2021.

Jurors in Washington, DC, found Erik Herrera, 34, guilty of one felony and four misdemeanors for joining the mob that entered the Capitol building.

The Department of Justice said that although Herrera is a photographer, he was not in the Capitol as a credentialed journalist and was wearing a press patch that was not issued by a media organization.

Prosecutors allege that on Jan. 7, he wrote on social media, “I don’t have a monopoly on press badges. They’re on Amazon for like $8…No special permission to buy.”

He also posted a picture of himself inside the Senate Parliamentarian’s office on social media. Authorities arrested him in Los Angeles last year. He is set to be sentenced Nov. 10.

Herrera joins more than 860 people arrested across the country for crimes related to Jan. 6, including at least three others with San Diego County connections.

Earlier this year, former Coronado resident Jeffrey Alexander Smith was sentenced to a three-month prison term for taking part in the breach, while former Ocean Beach resident Philip James Weisbecker was sentenced to 30 days in custody.

Carlsbad resident James McGrew, who pleaded guilty to assaulting law enforcement officers at the Capitol, is slated to be sentenced in October.