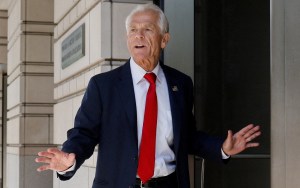 The U.S. Department of Justice on Wednesday sued Peter Navarro, an adviser to former President Donald Trump, seeking emails from his time in the White House that he has refused to return without a grant of immunity.

The lawsuit, filed in U.S. District Court in Washington, D.C., centers on Navarro’s use of a personal ProtonMail for some official White House business.

“Navarro is wrongfully retaining presidential records that are the property of the United States, and which constitute part of the permanent historical record of the prior administration,” Justice Department attorneys said in the lawsuit.

The 72-year-old is well known in San Diego because he ran unsuccessfully for local and state offices five times as a Democrat or independent while living here and teaching economics at UC Irvine. Navarro was appointed trade advisor by Trump because of his series of popular books accusing China of unfair trade.

The case is unrelated to misdemeanor contempt of Congress charges filed against Navarro by the U.S. government in June over his refusal to provide testimony or documents to a House of Representatives committee investigating the Jan. 6, 2021 riots.

Navarro last month declined an offer by the government to plead guilty to a contempt of Congress charge, according to federal prosecutors.

Attorneys for Navarro could not immediately be reached for comment.