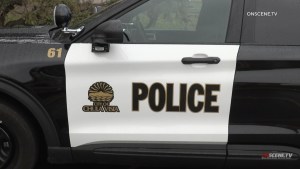 A group of youths shot and stabbed two homeless men in Chula Vista Friday then fled on a trolley to San Diego, where police arrested three of the suspected assailants.

A 911 caller reported the assaults at Harborside Park in the 600 block of Oxford Street at about 6:45 a.m., according to the Chula Vista Police Department.

The caller told a dispatcher a group of four to six juveniles had been surrounding a man with what appeared to be a gunshot wound to the leg before running off to the south toward a nearby transit station. They were seen boarding a northbound trolley at the station.

About five minutes later, another emergency caller reported a second victim in the park shooting, a man found suffering from gunshot and stab wounds in front of a business in the 600 block of Palomar Street, police said.

Paramedics took the victims, ages 26 and 33, to a hospital for treatment of injuries that were believed to be non-life-threatening.

A short time later, three of the suspected assailants were arrested by San Diego police at Park & Market Trolley Station in the East Village.

Though the motive for the attack was unclear, there was no evidence that the victims were targeted because they are homeless, according to police.

Both victims were believed to have been living in Harborside Park.