Kim Gives Padres a Scare, Then a Lift As Bell Homers in 2-1 Win at Petco Park 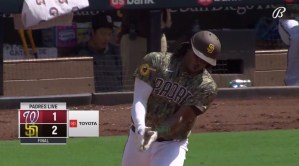 Newcomer Josh Bell homered for the second straight game as the Padres won 2-1 to split a four-game series with the Washington Nationals.

Bell, acquired in the trade with the Nationals that brought Juan Soto to the Padres, has had a rough start with the Friars. He may have begun his turnaround, with a fifth inning home run in Saturday’s 2-1 win and his sixth inning two-run shot Sunday.

The Padres, behind 1-0, struck quickly in the inning, as Brandon Drury doubled, then Bell, serving as DH, sent a line drive deep to right field to give his team the lead.

That’s because of Kim’s feat in the top of the the sixth, when he chased an Alex Call pop-up down the line into foul territory and hit the wall awkwardly while reigning it in. Bell pronounced himself “terrified” by the play. Manager Bob Melvin said he was “almost positive” the shortstop had injured himself. But he was fine and played on.

Sean Manaea went seven innings, striking out four and throwing just 69 pitches. Nick Martinez, during Josh Hader’s break from the closer role, earned his fifth save in a 1-2-3 ninth.

The Padres have an off day Monday before welcoming the Cleveland Guardians to Petco Park for a two-game set. Mike Clevinger takes the mound on Tuesday, with Wednesday’s starter TBD.