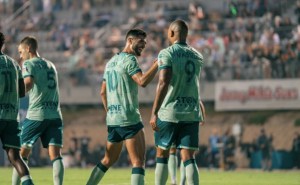 San Diego Loyal SC broke out with a 5-0 win – the largest margin of victory in franchise history – against visiting Indy Eleven at Torero Stadium.

The Loyal had a pair of goals by Kyle Vassell, along with scores by Thomas Amang and Tumi Moshobane, combined with an own goal by their opponents.

With Saturday’s win, the team added another three points to its strong start before the final home match in June against defending USL champion Orange County SC ( 4-7-5, 17 points ) at 7 p.m. Wednesday.

“​​I think outside the first 10 minutes, that was the best 80 minutes we’ve played as a team since I’ve been here in three years,” manager Landon Donovan said.

Donovan had said last week that he wanted to punish opposing teams with his club’s attack. As SD Loyal (8-4-4, 28 points) welcomed Indy Eleven (6-6-3, 21 points) for the first time at Torero, they did just that.

Said it with our chest. pic.twitter.com/yAGPoIkXP0

Amang opened up the scoring in the 29th minute, sending in a shot from 25 yards out after a defensive mistake. He sped around goalkeeper Bryan Meredith to send it into the open net for his sixth goal of the season.

Vassell extended the lead to 2-0 in the 42nd minute with a right-footed shot from just inside the penalty area for his ninth goal of the season. He made a half turn to beat the Indy goalkeeper after taking a bouncing cross from Jack Blake.

The striker added his second of the night with a left-footed shot ten minutes later, slotting it into the left wall of the net to extend the SD Loyal lead to 3-0.

SD Loyal took a 4-0 lead when Indy Eleven’s Mechack Jerome deflected a Moshobane low shot into his own net. Moshobane, a second half sub, did get a goal to his own credit in the 85th minute when he dribbled around traffic and fired past the Indy keeper for his third goal of the year.