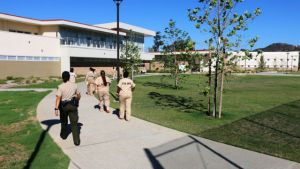 The Las Colinas Detention and Reentry Facility in Santee. Courtesy California Board of State and Community Corrections.

An inmate who was stricken by some sort of medical emergency this week at Las Colinas women’s jail in Santee died in a hospital of unknown causes Wednesday, authorities reported.

Vianna Granillo, 25, was pronounced dead shortly before 3 a.m., according to the San Diego County Sheriff’s Department.

Granillo had been booked into the Riverview Parkway detention center after being arrested on suspicion of violation of a court order on Friday morning, Lt. Chris Steffen said.

At about 2 a.m. Tuesday, deputies conducting a safety check found Granillo unconscious and unresponsive in her cell. Deputies and jail medical staff performed lifesaving procedures prior to the arrival of paramedics, who took over the emergency care and transported her to a trauma center, where her condition continued to decline until she died.

“The cause and manner of death are still under investigation,” Steffen said Wednesday afternoon.

An autopsy is scheduled for Thursday.