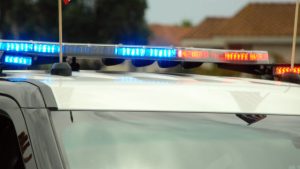 Lights on a police car. Photo by Alexander Nguyen

A San Diego man has been arrested for alleged child endangerment for driving with his children in an illegal auto “sideshow,” San Diego Police reported Wednesday.

The sideshow took place at 9:30 p.m. Tuesday at a shopping center parking lot in the 3400 block of College Avenue near Chollas Lake.

Authorities said “dozens of vehicles participated in the sideshow, which included multiple vehicles performing ‘burnouts’ and ‘donuts’ on private property.”

Police arrived and saw one of the drivers performing illegal stunt driving.

“The vehicle collided with a planter box in the parking lot and came dangerously close to hitting the spectators,” according to the police report.

“Officers stopped the vehicle and learned that the driver’s 5- and 6-year-old children were in the backseat. The children were not restrained in child car safety seats.”

Police arrested Jonathan Mendoza. 31, and he was booked into the San Diego County Jail on suspicion of reckless driving, DUI and felony child endangerment.