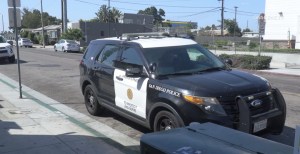 An elderly man died Friday in San Carlos when a BMW hit his SUV as he tried to turn into a driveway.

The victim, 82, was driving a Toyota SUV westbound in the 7500 block of Mission Gorge Road and attempted to make a left turn into a driveway on the south side of the streets shortly after 4 p.m., San Diego police said.

Medics sent the SUV driver to a local hospital where he died. The BMW driver sustained minor injuries and the Tesla driver was not injured.