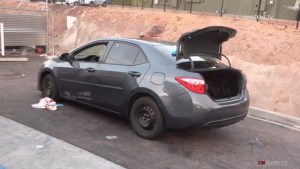 Bullet holes mar the victim’s vehicle, and a bloody garment can be seen near the tire. Photo credit: OnScene.TV

A man was shot and wounded Friday over a $1,000 marijuana deal in Azalea-Hollywood Park, but was able to flee under his own power and call police.

The male driver of a Toyota allegedly had planned to buy a pound of marijuana from a dealer, who he went to meet at an apartment building at Sumac Drive and Juniper Street, according to OnScene.TV.

But the dealer, instead of selling the marijuana, attempted to rob the victim of the cash.

The suspect, described as a Hispanic male, six-feet-tall, wearing all black, pulled out a gun and fired five times at the victim. Three bullets hit the victim’s car and hit him in the leg.

The victim fled and drove to the Shell Gas Station at Home and Fairmount avenues, where he called San Diego police.

Officers found the victim and medics transported him to a local hospital with non-life-threatening injuries.