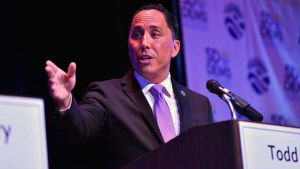 Mayor Todd Gloria Tuesday announced the creation of the city’s new Office of Immigrant Affairs, which began work on Friday as part of his Fiscal Year 2023 “Ready to Rebuild” budget.

Gloria appointed Rita Fernandez, his current director of global affairs, to serve as the office’s first executive director. Additional staff members will be hired in the new fiscal year.

“Immigrants are an important part of our community, but often feel disconnected or unsupported by their city government,” Gloria said. “That’s why I’ve created the Office of Immigrant Affairs, which strives to welcome immigrants to San Diego and make sure that their voice is heard by City Hall.

“This office will help us promote inclusivity, ease the transition for immigrants and help them feel supported as part of our community,” he said. I

The new office will focus on “workforce development for the immigrant population, promoting inclusive resources to help foreign-born communities through the integration process, advocating for immigrant rights and developing a language access plan to provide translation and interpretation services for city programs and services,” a city statement said.

Fernandez, a Chula Vista native, graduate of the University of San Diego and the daughter of immigrants, said, “I am humbled by this opportunity to build out an Office of Immigrant Affairs that will support all of our diverse immigrant communities in San Diego, which represent more than 115 countries around the world.”

Fernandez was appointed as Immigrant Affairs Manager after the city first launched the Welcoming San Diego Strategic Plan and Initiative in 2019.

Prior to working for the city, Fernandez worked in the Immigrant Affairs office of Los Angeles Mayor Eric Garcetti and served in the Washington D.C. office of Rep. Juan Vargas, D-San Diego.

Stepping into the role as the Gloria’s director of global affairs is Javier Gomez, who brings five years experience, previously working in the California State Assembly and more recently as the mayor’s senior advisor of policy and council affairs.

“I’m excited to expand and elevate San Diego’s global profile and work with our foreign partners around the world to ensure we are promoting the many aspects that make San Diego so unique,” Gomez said. “I look forward to continuing to partner with Tijuana to further strengthen our binational region and attract more foreign direct investment to San Diego.

“I want people to see the U.S./Mexico border as more than just an economic driver. At its core, our border isn’t about how much money it brings to our region, it’s about the people that live, work, go to school and access healthcare on both sides of the border,” he added.