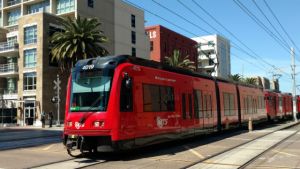 Ridership on the Metropolitan Transit System continues to climb, exceeding 5 million trips a month since March 2022.

The report for the fiscal year ended June 30 revealed an increase in ridership of 52% for trolleys and 41% for buses — nearly 50% overall — when compared to the previous year.

The COVID-19 pandemic provided a major challenge for transit agencies across the country as commute habits changed, including for MTS where ridership plummeted to about 30% of normal levels in April 2020. Ridership has since been able to recover to approximately 75% of pre-pandemic levels and reached approximately 200,000-weekday trips in the spring-summer of 2022.

The largest increase in trolley ridership was seen on the UC San Diego Blue Line, which went up by 66%, jumping from 10.4 million rides the prior fiscal year to 17.4 million. In November 2021, MTS inaugurated an 11-mile Mid-Coast Trolley extension to UTC, and this allowed for the largest increase in ridership in one year for any line in the history of MTS.

Some of the largest increases in ridership were along routes that serve the major school and employment centers. The Rapid 201/202/204 routes all saw over 300% jumps in ridership as UC San Diego students and staff returned to school in person.

Bus ridership also increased to more than one million trips each for the system’s highest performing bus routes which include Rapid 215 and Routes 7, 13, and 929, and service areas of City Heights, Downtown, City College, South Bay, and Grantville.

In May 2022, MTS, North County Transit District and the San Diego Association of Governments launched the Youth Opportunity Pass pilot program, which allows youth 18 and under to ride free. Following the launch, youth bus ridership jumped 34% in the first month of free transit (May vs April 2022), and remained high in June, even as schools were no longer in session (18% increase over April 2022).