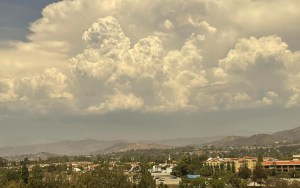 A monsoon weather pattern for San Diego County was predicted to continue through this week, leading to a daily risk of thunderstorms, mainly during the afternoons over the mountains, the National Weather Service said.

“A weaker Monsoon flow will continue this week, maintaining a threat of isolated, afternoon thunderstorms near the mountains, while a shallow marine layer and sea breezes keep the coast cooler,” the weather service said. “Temperatures and humidity levels will continue to run a little above normal.”

It will be quite warm again today with highs 3-5° F above normal west of the mountains and near normal in the mountains & deserts. Humidity will continue to be somewhat elevated. #CAwx pic.twitter.com/V8NUdjK7Ja

Thunderstorms were active over East County on Sunday. The largest dropped an estimated 1.5 to 2 inches east of Julian, which prompted a flash flood warning. But the thunderstorm threat will diminish this week.

“A few thunderstorms could still develop and roam our higher mountains, and deserts, but they shouldn’t be as intense, or as numerous as the past couple of days,” the weather service said.

High temperatures on Monday were forecast to range from around 80 near the coast, mid 80s inland, uppers 80s in the western valleys, mid 90s near the foothills, lower 90s in the mountains, and upper 90s to mid 100s in the deserts.