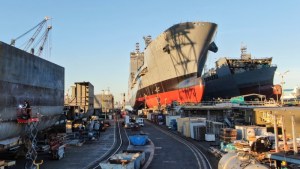 Fleet oilers under construction at NASSCO in Barrio Logan. Photo courtesy of the shipyard

“NASSCO shipbuilders are honored to build T-AO 211, T-AO 212 and ESB 8,” said Dave Carver, president of General Dynamics NASSCO. “The NASSCO team is excited to work with our Navy partners to ensure the success of both historic programs, which are critical in supporting the Navy’s forward presence.”

Construction of the ships is scheduled to begin in the third quarter of 2023 and continue into 2027.

The company said the new contract is an opportunity to sustain and grow the workforce along San Diego’s working waterfront.

The fourth ship in the expeditionary sea base program, the future USNS John L. Canley, was christened at the shipyard on Saturday. These vessels are floating Marine bases that can support special operations missions.

The fleet oilers are designed to refuel and replenish Navy carrier strike group ships while operating at sea.