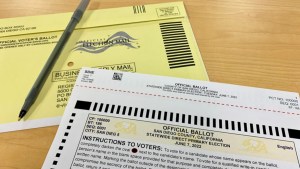 Robert Howell’s lead over Assemblyman Marc Levine had dropped by 18 votes to 4,921 in the race for the second spot on the November ballot for insurance commissioner.

Howell, a Republican, moved back into second place this week, overcoming a 123-vote deficit at the start of the day.

An estimated 118,134 ballots remain unprocessed from the June 7 primary, including 68,500 from San Diego County, according to the Secretary of State’s Office.

Howell was 31,232 votes ahead of Levine when semiofficial results were released June 8.

The nine candidates – four Democrats, two Republicans, one candidate each from the Green and Peace and Freedom parties and one no party preference candidate – have received nearly 6.7 million votes.

County elections officials must report final official results to the state by July 8. Secretary of State Shirley N. Weber will certify the results on July 15.