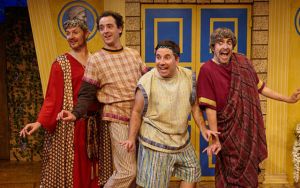 The 2018 production of “A Funny Thing Happened on the Way to the Forum,” at North Coast Repertory Theatre. Photo by Aaron Rumley

The seven-play series includes a Tony Award-winning musical, a poignant love story, a murder mystery, a humorous social commentary, a musical revue and an uproarious comedy.

“We believe that our upcoming season will appeal to both our loyal subscribers and a broad spectrum of theater lovers,” said Artistic Director David Ellenstein. “We genuinely can say there’s something for everyone.”

The world premiere of Annabella in July kicks off the Solana Beach theater’s season on Sept. 7. The comedic fantasy transforms a ski resort during the off-season into a strangely magical environment of self-discovery. Ellenstein directs the show, which continues through Oct. 2.

The remainder of the season includes:

During the holidays, North Coast Rep reprises an audience favorite, 2 Pianos 4 Hands by Ted Dykstra and Richard Greenblatt. Jefferson McDonald and Matthew McGloin lead the musical comedic journey about their would-be careers as concert pianists while playing everything from Bach to Billy Joel. From Dec. 7, to Jan. 1, 2023.

Tickets for season shows start at $54 with discounts available.