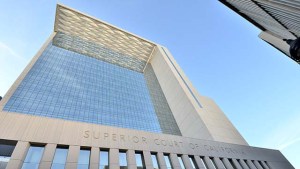 Gov. Gavin Newsom announced Friday that he was pardoning a man convicted of attempted murder in San Diego County, while also granting a commuted sentence for another man serving a 140-year-to-life prison term for armed robberies in the county.

The announcements were among 17 pardons, 15 commutations and a medical reprieve announced Friday by the governor’s office.

Regarding San Diego County crimes, Newsom pardoned Manuel Vasquez, sentenced in 2008 to five years in prison for attempted murder and assault with a deadly weapon.

The governor’s statement announcing Vasquez’s pardon states that after Vasquez’s co-defendant shot and injured two people, Vasquez picked up his cohort and drove him from the crime scene.

Earlier this month, Vasquez was granted a Certificate of Rehabilitation from the San Diego Superior Court “on evidence that he has been living an upright life.” The court also recommended that he be granted a full pardon.

Newsom’s office also announced a commutation of the prison sentence of Eric Cowan, who committed a series of armed robberies in 1997 and 1998, none of which resulted in injuries.

Cowan, now 60, has served 24 years of a 140-year-to life prison term. During that time, he has “dedicated himself to his self-improvement” and “engaged in self-help programming and completed vocational training,” according to the governor’s office.

The Board of Parole Hearings and California Supreme Court recommended a clemency grant, leading Newsom to grant the commutation, which means Cowan will get an earlier opportunity to appear before the parole board.

“Mr. Cowan committed serious crimes. Since then, Mr. Cowan has demonstrated a commitment to his self-improvement and rehabilitation,” the governor’s statement read. “I have carefully-considered and weighed the evidence of Mr. Cowan’s positive conduct in prison and his good prospects for successful community reentry.”