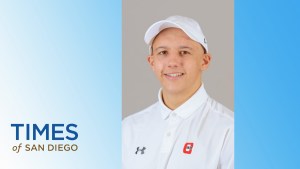 Nick Herrmann, who battled back from a cancerous tumor in his left leg to help Torrey Pines High School win a basketball championship, died Saturday at age 20.

Herrmann, who committed to play for Cal State Northridge, succumbed after a second cancer fight at 7:40 a.m., according to CSUN men’s basketball head coach Trent Johnson.

“We lost a very special young man,” the coach said, noting that “in athletics, when there is a great player, we as coaches speak about them being different or having the `it’ factor; Nick possessed those qualities.”

“When it comes to being genuine, authentic and loyal, he was all of that,” Johnson said. “For some of us, to have the opportunity and the privilege of being around him, the impact he had was instrumental.”

The Torrey Pines basketball program called the alum “a fighter until the very end.”

We are devastated to announce the passing of our beloved Nick Herrmann earlier this morning.

A fighter until the very end, Nick has made an impact on thousands of lives. His legacy as a fine young man, CIF champion, and proud Torrey Pines Falcon will carry on forever. pic.twitter.com/15sh4uoYEU

“His legacy as a fine young man, CIF champion, and proud Torrey Pines Falcon will carry on forever,” officials said in the Twitter post.

Herrmann was first diagnosed with the tumor in September 2018 and was told he could lose his leg and be forced to never play basketball again, according to CSUN.

He missed a full year of high school, but returned to the Torrey Pines basketball team and averaged 10 points per game his junior year and nearly 19 points and five rebounds per game in his senior season.

His return culminated in a Falcons victory in the 2021-22 CIF San Diego City Championship game and his contribution was instrumental – a last-second three-point basket to secure the title.

Herrmann was recruited for the CSUN team, but the cancer returned just weeks into his summer training. Despite being ill and unable to play, he remained a fixture at Matadors’ practice and cheered at games while undergoing treatment.

He died at Rady Children’s Hospital, according to the San Diego Union-Tribune.

Despite his youth, CSUN concluded, Herrmann, left “behind an indelible legacy filled with people he impacted for the better.”