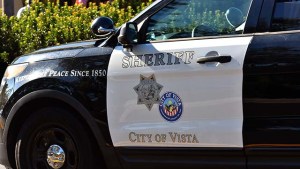 Detectives arrested an Oceanside man Friday for an alleged act of indecent exposure at a woman’s Vista home earlier in the week.

At around 1 p.m. Tuesday, the victim had finished shopping at a grocery store in Oceanside, when she returned home and realized she had been followed. The man who did so exposed himself to her before driving off.

San Diego County Sheriff’s deputies from the Vista station responded to the woman’s 911 call and began a search of the area, but could not locate the suspect.

Sheriff’s detectives learned of surveillance photos that captured the incident, and based on the evidence identified the suspect as Anton Hill, 23.

Detectives interviewed Hill at his home, where he allegedly admitted to the crime.  They then obtained an arrest warrant, took him into custody and booked him into the Vista Detention Facility on charges of indecent exposure.