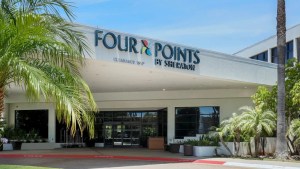 Entrance to the Four Points by Sheraton hotel in Kearny Mesa. Courtesy of the hotel

One of two men who planted a pipe bomb that detonated at a Kearny Mesa hotel earlier this year but caused no injuries was sentenced Monday to two years behind bars.

Grover Preston Everett, 39, and Hans Jurgen Sarda, 30, pleaded guilty to charges of recklessly or maliciously possessing a destructive device for placing an explosive on the second floor of the Four Points by Sheraton.

The device was set off on the morning of Feb. 24, though it did not result in any injuries and only minor damage to the hotel.

According to Deputy District Attorney Christina Eastman, the device that detonated was a steel-threaded pipe containing powder-actuated loads. It was placed near a pair of vending machines, where it went off minutes after Everett and Sarda left the hotel.

Police and prosecutors have not disclosed a suspected motive for the bombing.

SDPD Lt. Adam Sharki said that tips from the public led investigators to the suspects, who were arrested about a week after the explosion.