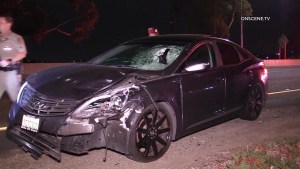 Damage sustained by one of the three vehicles in the crash. Courtesy OnScene.TV

The collisions were reported about 2:30 a.m. on eastbound Route 94 east of Route 125, according to the California Highway Patrol.

A videographer at the scene was told the collisions began with BMW and Mercedes sedans and the fatality occurred when one of the drivers got out of his vehicle as was struck by a Hyundai sedan.

The CHP temporarily shut down eastbound lanes Nos. 1 and 2 in the area to investigate the crashes.

City News Service and OnScene.TV contributed to this article.