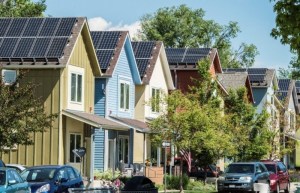 San Diego is at an energy crossroads. Electricity rates are sky-high, and electricity demand is projected to increase by at least 60% by 2050 to meet the growing energy needs of communities. At the same time, our region’s aging and unsafe fossil fuel infrastructure is not equipped to withstand more frequent and intense heat waves caused by climate change.

With San Diegans currently facing the compounding pressures of the skyrocketing cost of living, soaring fossil fuel prices, a climate-fueled megadrought and another summer of extreme heat and wildfires — we urgently need affordable, renewable electricity solutions.

Enter community solar. These programs expand access to solar power by allowing those who cannot simply put solar panels on their home — because they rent, or live in multi-family buildings, or are living on lower incomes and struggling against rising prices — to join with others in their neighborhood to share a renewable energy system, which generates a credit on their electricity bill.

Surprisingly, while California has been a leader on rooftop solar adoption for wealthier residents, we are far behind other states in offering affordable community renewable energy options to residents who do not own their home. These programs are urgently needed in California.

A bill authored by Assemblymember Chris Ward of San Diego, Assembly Bill 2316, recently passed out of the Senate Appropriations Committee, making its way to the Senate floor. If successful and enacted by the Governor it will create an innovative new program offering affordable community solar and storage across the state.

This vital legislation will require that at least 51% of the capacity of each community solar facility be subscribed to by low-income customers or service organizations, to ensure they benefit and aren’t left behind in the renewable energy transition.

The governor has also proposed investing $1 billion of the state’s record budget surplus to create and fund a statewide Community Renewable Energy Program. The bill and allocation of $1 billion in the budget would allow us to move toward a more transformative vision for energy democracy that rids our communities of dangerous gas infrastructure, lessens the influence of greedy utility corporations all while increasing community solar ownership, economic development, and high-quality jobs for frontline communities.

An industry analysis found California would be on track to generate and add 800 megawatts of community solar and storage power to the capacity of the grid by the summer 2025, helping bridge the projected gap. Fueled by greater federal tax credits, the bill and $1 billion companion budget request would result in a boom for union-wage clean energy jobs.

If we don’t prioritize community energy, San Diegans will continue to suffer from ridiculously high electricity rates. It’s no secret that we pay the highest electricity rates in the country due to monopoly utility San Diego Gas & Electric. As a result, 1 in 4 residential customers are struggling to pay their electric bills

. At the same time, the utility’s parent company, Sempra Energy, recently paid its investors record dividends, with approximately a third of their revenue coming from SDG&E ratepayers. Why should our money be lining executives’ pockets, even as they work to keep us chained to polluting energy?

The adoption of community solar and storage offers an opportunity to bring relief and benefits to frontline communities — and an alternative to SDG&E. We’re tired of footing the bill for Sempra executive bonuses, and paying for an increasingly costly and unsustainable gas infrastructure system.

Sunshine is abundant in San Diego. It’s part of what makes our region so special. By ensuring the passage of AB 2316 and funding the Community Renewable Energy Program, Sen. Toni Atkins can help residents of San Diego benefit from this affordable, clean energy source that can never run out.

Alexis Sutterman is the energy equity program manager with the California Environmental Justice Alliance and Dr. Scott T. Kelley is co-chair of Raise The Alarm with San Diego 350.