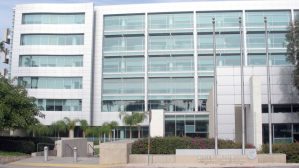 The California State University system’s office of the chancellor in Long Beach. Photo via Wikimedia Commons

The semester is about to start, but if you are faculty at the CSU, it’s hard to generate any enthusiasm. It’s not that we don’t like teaching or research. Generally, we love both, and we are very good at both.

It’s that our bosses, the administration, think that we are fundamentally worthless. The administration also thinks that they, not the faculty, are worth their weight in gold.

First, a few days ago, the California Faculty Association released the following chart detailing the eye-popping raises the Board of Trustees awarded the presidents of the CSUs.

Salary bumps ranged from 7% to 29%. San Diego State’s Adela de la Torre now pulls in over half a million dollars in compensation, and she does not have to worry about housing costs. Nor do seven other presidents.

The board’s generosity also extends to other administrators as well: each, I am told, will receive a 7% raise.

As for the faculty, the California Faculty Association negotiated a 4% raise for this year, well behind the rate of inflation, but it was something. Then, at the last minute, for reasons that remain mysterious, Gov. Gavin Newsom, Senate President pro Tempore Toni Atkins, and Assembly Speaker Anthony Rendon scooped $100 million out of the budget, reducing the raise to 3%.

It gets worse. It’s not just a matter of salaries. The administration’s stinginess also extends to the teaching mission.

For example, my friend and colleague Edith Frampton, a longtime lecturer in the English Department, was scheduled to teach five sections of a writing class, each capped at 30 students. Four of the classes filled and two have a waiting list. Yet the fifth fell below the threshold and has (as of this writing) 10 students.

But the administration thinks that such a small class (which is the size a writing class should be) isn’t “viable, and would rather pull it sooner rather than later to give students time to find an alternative class.” Never mind the fact that Frampton is already teaching 120 students. A small class in which students can get individual attention isn’t a “viable” class. So they want to cut it.

SDSU’s administration also made the unfathomable decision to save money by reducing the teaching assistants’ workload from 20 to 16 hours a week, thereby putting them below the threshold for SDSU having to provide them and their families with health insurance. SDSU does provide an option, except that their coverage costs $3,000 and applies only to the individual. Family members must buy health insurance separately.

So if the CSU isn’t willing to spend money on faculty and TAs, what are they spending money on?

Well, the Imperial Valley Campus is getting a $100 million dollar makeover (never mind that enrollment has declined from 1065 in 2019 to 951 in 2021). That’s where the money for our raises went.

And SDSU’s administration loves to hire outside consultants. Something called “the SmithGroup” will, as the announcement says, “begin a space utilization study to inventory and assess all existing non-residential spaces across our campus locations.” Approximately $175,000 went to another group of consultants to come up with guidelines for “when the three secondary colors may be used.”

To paraphrase Kafka, there’s money, endless money, for consultants and executive compensation. But none for the people who do the university’s work.

The CSU’s priorities are just wrong, and they have to change.