Opinion: Is SDSU’s Imperial Valley Campus a Boondoggle in the Making? 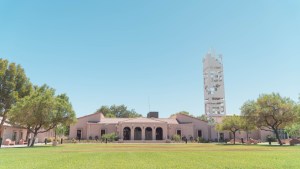 On the same day (not coincidentally, the Friday before a holiday weekend, the best time for dropping bad news), the California Faculty Union told its members that the budget also contains an unpleasant surprise: Gov. Gavin Newsom, Senate President pro Tempore Toni Atkins, and Assembly Speaker Anthony Rendon agreed among themselves to strip the CSU budget of $100 million.

The new budget number means that the salary raise supposedly signed, sealed, and delivered in the latest contract, a raise that should have been 4%, is now 3%. At a time when inflation, the highest since 1981, is running at 8.6%, Newsom, Atkins and Rendon decided to break the contract negotiated with the union, and put CSU faculty even farther behind. Their bad faith does not bode well for future contract negotiations.

Nor did the CSU administration step up to defend its faculty. We often hear from our leaders about how grateful they are for the wonderful work faculty do for our students. In her May 26, 2022, email to the CSU faculty, for example, interim-Chancellor Jolene Koester praised “the work, attention and care you deliver every day,” and how “it will be one of my highest priorities — and greatest joys — to support and shine a light on your remarkable work.”

But did Koester fight to maintain the already too-low raise? Not as far anyone can tell. Instead the Board of Trustees is focused on raising their own salaries.

Last year, Trustee Jean Firstenberg characterized raising their compensation as “one of the most important issues as a board that we can discuss,” and the board approved a plan for raises up to 10% a year for three years.

When you put these two announcements together, it’s hard not to see that the state is using funds originally earmarked for faculty salaries to pay for the expansion of the Imperial Valley campus. And the CSU administration, whose original salary offer was 2% this year and none next year, is perfectly happy to go along.

“Expansion,” however, is not quite the right word, because the Imperial Valley campus does not have any STEM (“science, technology, math, and engineering”) programs. As of fall 2021, the campus serves just 951 students, and its science program consists of precisely three majors: homeland security (16 graduate students); mathematics (13 undergrads); and psychology (258 undergrads). No physics, biology, chemistry, engineering, computer science, mining or metallurgy.

The program supposedly “ties into local excitement over prospects for extracting lithium, found underground near the Salton Sea.” But the programs that will, in theory, serve the lithium industry will need be built from the ground up, and it’s unclear if there will be sufficient student demand to justify the expense.

In addition, there’s California’s new flat-rate tax on lithium which, Reuters reports, “will delay deliveries of the electric vehicle battery metal to General Motors and Stellantis and may push some mining companies to exit the state entirely.” So there’s some doubt the lithium industry will even exist.

Once again, you have to wonder at the priorities of the people running the CSU. San Diego State University has major infrastructure issues: a crumbling library, roofs that need replacing, classrooms that need upgrades, elevators in desperate need of repair. But instead of addressing these needs, the university will spend $80 million —money, remember, that should have funded faculty salaries — to create from nothing a STEM program for a tiny outpost that serves 1/35th the student body the main campus serves.

Doubtless, showering money on the Imperial Valley campus makes for good politics. But does it make financial or educational sense?

Either way, the CSU faculty definitely should not have to fund it with a pay cut.