Opinion: The Frustrating Speed Bump on the Way to a Hydrogen Economy in San Diego 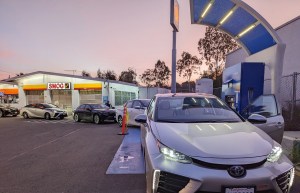 A line of five fuel-cell vehicles waiting to refuel at San Diego County’s only hydrogen station in Carmel Valley. Photo by Chris Jennewein

I’ve always been an early adopter. I had a home computer in the early 1980s, first browsed the Internet in 1994, purchased a Prius hybrid in 2000, and now drive a hydrogen fuel-cell car. But my latest foray into cutting-edge technology has been frustrating.

It’s not the car. My Toyota Mirai is a great vehicle, and kudos to Toyota for investing in this clean tech. But California hasn’t made the investments necessary to support a hydrogen economy.

Gov. Gavin Newsom has set a goal of 5% fuel-cell vehicles by 2030 and vowed to build the necessary infrastructure. “California has a growing network of charging and hydrogen refueling stations with plans to put thousands more into service,” his Air Resources Board promises.

That’s great to hear. But there’s still only one hydrogen fueling station in San Diego County and it’s frequently down, out of hydrogen, or stuck in frustrating 15-minute “refresh” cycles. Even at night lines of waiting cars stretch 3, 4, 5 vehicles.

I knew there was only one station when I leased the car in early 2020. But the California Fuel Cell Partnership map showed three more “in permitting.” Nearly three years later, none of those have opened.

Industry officials blame the pandemic, and say local jurisdictions haven’t been helpful, but that’s hard to believe when there are dozens of stations across Los Angeles and Orange counties. One station planner admitted to me that they didn’t expect San Diego to be an early adopting community but just a “destination” — a refueling stop for day trippers from LA.

San Diego? The home of Qualcomm and 5G? The third largest biotech cluster after Boston and San Francisco? Birthplace of the Predator drone? Perhaps whoever planned the stations was a little out of touch with the local high-tech reality.

San Diego’s early hydrogen adopters are nevertheless a resourceful group with a sense of humor. We tip off each other when a shipment arrives, help each other when fuel nozzles get stuck, and share stories while waiting in line at night. Some people eat meals in their cars, others pull out laptops or read books.

There have been improvements. The fuel nozzles don’t freeze tight any more (compressed hydrogen gas is dispensed at -40 degrees), and a website shows when the pump is down. Technicians are always on call and always helpful, but they’re frustrated too.

And, unfortunately, the level frustration is growing. When I refueled on Tuesday (an hour-long process), all of the drivers I spoke with said they were planning to switch to battery-electric vehicles. That’s not good for California’s climate goals.

Hydrogen has the potential to be the cleanest fuel on the planet. The reaction that creates electricity to power a car produces only water as a byproduct. And hydrogen can be created again from water using clean electricity from solar and wind. This is all very good for the climate.

But if the early adopters turn away from hydrogen because of the frustrations experienced in San Diego, how will it ever become mainstream?

I still think there is enormous potential in a clean economy based on hydrogen — but only if we can get it.

Chris Jennewein is editor & publisher of Times of San Diego.