Padres Drop Opener to Dodgers, but Tatis Return on Horizon as He Heads for Rehab Stint 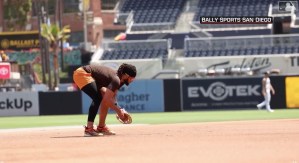 Fernando Tatis Jr. at work last month during his recovery from a fractured wrist. He is set to begin a rehab stint in the minors this weekend. Photo credit: Screen shot, mlb.com

The Padres‘ hopes for overwhelming the Dodgers with their fresh new additions dissipated quickly Friday, but they got good news on another front – Fernando Tatis Jr. is on the cusp of beginning a rehab assignment.

While the Padres fell 8-1 in Los Angeles, Tatis, who has yet to play this year while his fractured wrist healed, made a brief appearance at Dodger Stadium Friday, facing some live pitching, as he’s been doing off and on since July.

His next stop? San Antonio, according to MLB.com, where he will play with the Padres’ Double-A team for an undetermined period before starting his season with the big club.

Manager Bob Melvin said Tatis will log time at his regular shortstop position while in San Antonio, but also will play centerfield and act as a DH.

“This is one where he’s been out long enough to where we really don’t want to get ahead of ourselves,” Melvin told MLB of taking a cautious approach to Tatis’ return.

The All-Star probably would not have made a difference Friday as Sean Manaea gave up eight runs – four in the first inning and four in the third – in four innings of work. Melvin said he didn’t have “his best stuff, certainly not his best location.”

The Dodgers held the offense to one murmur of protest – Josh Bell crossed the plate in the ninth for the Padres – and four hits, including one each by Bell and fellow newcomer Juan Soto.

With the loss, the Padres trail the Dodgers by 13.5 in the National League West, but sit behind Atlanta and ahead of Milwaukee in the chase for the three NL wild-card spots.

Meanwhile, the Dodgers honored the late Vin Scully in a pre-game ceremony before the start of the three-game set. Scully, the Dodgers’ broadcaster for 67 years, died Tuesday at the age of 94.

The series continues Saturday when Mike Clevinger takes the mound, with Yu Darvish to follow Sunday.