Padres Fall to Mets 8-5, Settle for Series Win Before Moving on to Detroit 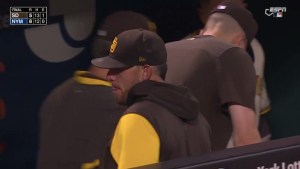 Joe Musgrove turns away after the Mets close out the 8-5 victory to avoid a Padre sweep Sunday. Photo credit: Screen shot, ESPN

Joe Musgrove cruised through four innings Sunday as the Padres aimed for a sweep of the National League East-leading New York Mets. Yet it wasn’t to be.

The El Cajon native hadn’t given up a hit to that point, but the Mets got to him in the fifth, with two quick hits.

Nevertheless, Musgrove weathered the inning, and the Padres rewarded the effort. Eric Hosmer gave him a 1-0 lead in the sixth with a two-out double to score Nomar Mazara.

But it didn’t last. Starling Marte led off the bottom of the inning with a single, followed by a Francisco Lindor double. Then Pete Alonso won the clash of the 2022 All Stars, slamming a three-run home run to left center.

PETE FOR THE LEAD!!!

The Mets extended their advantage to 5-1 before the inning was over, with Musgrove tagged for four runs and his successor, Nick Martinez, for one.

The Padres put up a late murmur of protest in the ninth, scoring three, but the Mets held on for the 8-5 win.

Manager Bob Melvin told 97.3 The Fan after the game that “three hitters kind of told the tale for” Musgrove, but the offense missed early opportunities that “probably cost us a little later.”

The Padres head to Detroit for a three-game series, with Sean Manaea, Mike Clevinger set to take the mound Monday and Tuesday. Wednesday’s starter is TBD. The team has Thursday off before heading home to host Minnesota and Colorado.

Hoz gets us on the board