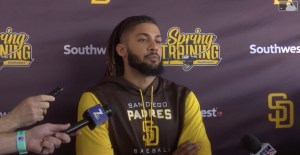 Fernando Tatis Jr. talks to reporters earlier this season about his injured wrist. The Padres are eager for his return. Photo credit: Screen shot, MLB.com

The Padres sagged in the month ahead of the All-Star Break, in an 11-18 stretch that began with a sweep at the hands of the Colorado Rockies.

They had just gotten a taste of first place in the National League West, but as of early Friday they trail the Los Angeles Dodgers by 10.5 games. But no matter what, the return of Fernando Tatis Jr. looms, which almost certainly will be a boost for the Friars.

“It’s gonna be a good show, a good second half,” Manny Machado told the MLB Network on the red carpet at the All-Star Game.

But he’s also mindful of this – rivalry or no, for the Padres to make the big leap a lot of baseball observers have been expecting, the road runs through L.A., the division powerhouse for the past decade.

“If we want to get to where we want to, we have to go through them and we know that,” Machado said of the Dodgers.

Juan Soto at the plate. Manny Machado is on deck. pic.twitter.com/ewQFhaLosX

The road began Friday in New York, where the Padres took on the NL East leaders. Yu Darvish drew the tough card – Mets ace Max Scherzer, who returned from an injured oblique before the break.

Yet, Darvish prevailed in the Padres’ 4-1 win, giving up one run in seven innings of work while striking out nine. Eric Hosmer delivered the big blow for the offense, a two-run home run in the fourth, his seventh of the year.

Blake Snell and Joe Musgrove get the call in the remaining two games of the three-game set.

Off the field, questions remain for the club, and believe it or not, determining the exact date of Tatis’ return from a fractured wrist isn’t the largest.

Tops on the list – one Juan Soto, who, having reportedly turned down a $440-million offer from Washington, is unlikely to remain a National much longer.

Realistically, could A.J. Preller pull off a blockbuster trade for the young slugger, who is as heralded as (or more than) Tatis? (A local sports radio station, 97.3, gave fans a glance at the possible future thanks to the All-Star Game, on Twitter)

MLB.com notes that it could happen by the Aug. 2 trade deadline, given the Padres stockpile of rookies and prospects. But how many of them would the team be willing to trade away?

Soto or no, Machado cannot carry the team alone – shown by the Padres’ late June droop, which coincided with his ankle injury. So expect Preller to be active.

“It’s no secret, we’ve got to score some more runs here in the second half, and that will be a focus for us over the next couple of weeks,” the Padres’ president of baseball operations told MLB.