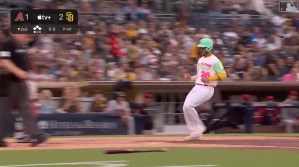 Austin Nola scores in the second inning of the Padres’ 5-3 win over the Diamondbacks. He also drove in two runs with a double. Photo credit: Screen shot, @Padres via Twitter

The Padres, hoping for a corrective after dropping three of four in Colorado, returned to Petco Park Friday and responded with a 5-3 win over Arizona.

Starter Yu Darvish went seven innings, giving up three runs on five hits while striking out nine to improve to 8-4.

The Diamondbacks jumped out to a quick 1-0 lead on a two-out Ketel Marte home run, but the Padres answered in the second.

The three-run rally started when Luke Voit reached on an error by third baseman Josh Rojas. Ha-Seong Kim then singled and Austin Nola drove them both in with a double to left. Esteury Ruiz added a single to drive in Nola for a 3-1 lead.

The Padres put two more on the board in the third, enough to stay ahead despite a Christian Walker two-run shot for Arizona in the fourth.

Nick Martinez spelled Darvish in the eighth, pitching a scoreless inning and Taylor Rogers took over in the ninth, with a 1-2-3 inning to earn his 25th save.

Meanwhile, Jurickson Profar not only returned from his stint on the injured list due to a concussion he suffered July 7, but also was in the lineup. He went 0-for-2 with two walks.

In other injury news, Fernando Tatis Jr. and his manager, Bob Melvin, offered updates on the slugger’s rehab from a fractured wrist.

Tatis, who has missed all of this season so far, will start hitting off a tee, then participating in soft toss, but the shortstop admitted he didn’t “know if it’s going to be quick or slow.”

Melvin added that the team was “trying to stay away from timelines” as far as estimates of Tatis’ exact return.

The Padres, with two more games before the All-Star break, send Sean Manaea and Mike Clevinger to the mound Saturday and Sunday.