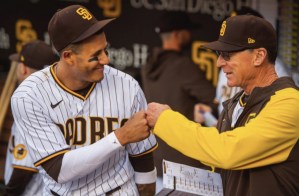 Bob Melvin, here with Manny Machado in April, returned to the dugout for the Padres Wednesday. Photo credit: @padres, via Twitter

It’s been sweep or nothing for the Padres lately, but the team came out on the right end of the bargain Wednesday, with a 10-4 win over the Diamondbacks.

The latest sweep – which included 4-1 and 3-2 wins against Arizona Monday and Tuesday at Petco Park – followed the Colorado Rockies’ takedown of the Friars in Denver last weekend and the Padres’ four-game dismantling of the Chicago Cubs that preceded it.

The team quickly left the D’backs in the dust Wednesday, as they led 6-0 after two innings.

Jurickson Profar helped lead the way, going 4-for-4 with two RBIs, while José Azocar had three hits and two RBIs. Jorge Alfaro added two hits, including a homer that bounced off the Western Metal Supply Building in left field.

Mike Clevinger had a rocky start, but settled in to go four innings before giving way to Adrian Morejon, who got the win. Nick Martinez, a starter for most of the year, was credited with the save after three-plus innings of work.

The team has avoided placing him on the injured list so far and Melvin, according to MLB.com, said “he looks a lot better than I thought he would.”

The Padres host the Philadelphia Phillies to close the brief home stand. Joe Musgrove – back from his absence due to a positive COVID-19 test – MacKenzie Gore, Blake Snell and Yu Darvish are set to get the starts.

Azocar turns on the jets for the triple