Padres Take Series from Twins, As Team Among Top Contenders to Get Soto at Trade Deadline 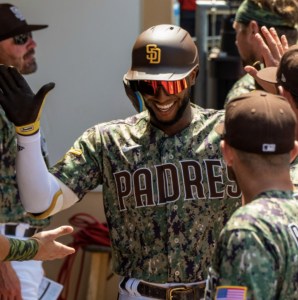 The Padres had reason to celebrate Sunday. Will they have more reason to do so after Tuesday’s trade deadline? Photo credit: @Padres via Twitter

The Padres, still in the Juan Soto hunt, beat the Minnesota Twins 3-2 Sunday to take the weekend series from the American League Central leaders.

Sean Manaea logged the win, going six innings in which he struck out seven while giving up two runs. Luis Garcia – not Taylor Rogers, who has lost the closer job, at least temporarily – got the save, his first of the year.

Jurickson Profar gave his team a 1-0 lead in the third inning with a solo homer, which held up until the fifth, when Luis Arraez hit his own solo shot off Manaea. The Padre starter gave up another homer the next inning, to Jose Miranda, to give the Twins a brief 2-1 lead.

The Padres broke through, though, in the bottom of the sixth, as Trent Grisham and Profar led off with singles. Former Padre Emilio Pagan replaced starter Dylan Bundy at that point, and managed to retire Manny Machado, but Jake Cronenworth and Luke Voit each followed with singles, which scored Grisham and Profar respectively.

Runs? Yeah, we got a couple of them

Meanwhile, various media outlets place the Padres atop the heap of teams that would like to take Soto off the Washington Nationals’ hands. One, the MLB Network’s Jim Bowden, said three teams remain in contention for the young slugger’s services – the Padres, Dodgers and Cardinals.

Manager Bob Melvin has had to deal with a spotty offense, particularly without Fernando Tatis Jr. He’s aware of his team’s reputation for being in play as trade talks go to the wire – this year, swaps must be done by 3 p.m. Tuesday.

“The guys that we have are the guys that I feel like we’re going forward with,” he told MLB.com. “If something changes, then great, if we make a big move or make subtle moves to enhance our roster.”

The home stand continues Monday as the Padres welcome the Rockies, who’ve given them fits recently. The Friars have their work cut out for them, because they have to face the Rockies not three, not four, but five times in the next four days, thanks to a Tuesday doubleheader.

The #Nationals now have only 3 teams left in the bidding for a Juan Soto trade according to club sources. The teams are believed to be #Padres #Cardinals and #Dodgers with the #Cardinals offering the most talent off their major league club and the Padres the most talent from Farm

Mike Clevinger is set to take the mound Monday, but the Padres have yet to announce their starters for the remainder of the series.