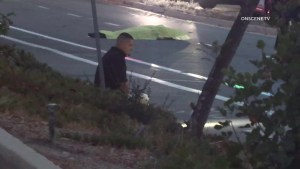 The scene of the pedestrian fatality in Oak Park. Photo via OnScene.TV.

A pedestrian was fatally struck Thursday by an SUV in the Oak Park neighborhood.

A 34-year-old man driving a Dodge Journey south on 54th Street struck a man in the middle of the roadway near Redwood Street around 4:30 a.m., according to the San Diego Police Department.

The driver and passenger of the Dodge cooperated with police. Traffic on 54th Street from College Avenue to Redwood Street was impacted during the investigation.