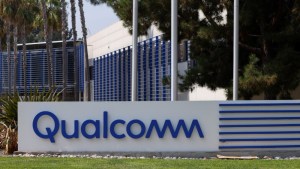 A sign in front of a Qualcomm building in San Diego. REUTERS/Mike Blake

Qualcomm on Wednesday reported double-digit increases in revenue and profit in its third fiscal quarter, but Wall Street was not impressed with the company’s cautious forecast.

President and CEO Cristiano Amon said the company benefitted from record revenue in its automotive and “internet of things” businesses, but acknowledged a “challenging macroeconomic environment” affecting chips used in consumer products.

The company told analysts it now expects global smartphone sales to fall 5% this year, compared with its prior outlook for flat growth.

“The weakness we see in consumer has been offset by the diversification strategy of the company and the focus on premium and high-tier handsets,” said Amon.

The company’s forecast for the fourth quarter was below analysts’ estimates, and shares closed down 2.9% in after hours trading.

Qualcomm estimated revenue of between $11 billion and $11.8 billion, compared with analysts’ consensus estimate of $11.87 billion, according to Refinitiv data.

Separately, Qualcomm said it has extended its patent license agreement with Samsung Electronics through the end of 2030. It also agreed to expand the use of Snapdragon platforms for future premium Samsung Galaxy products, including Samsung Galaxy phones.