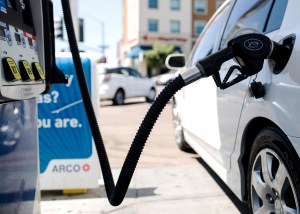 A car is shown at a gas station near the San Diego State University campus. (Megan Wood/inewsource)

The average price of a gallon of self-serve regular gasoline in San Diego County dropped for the 59th consecutive day Saturday since rising to a record, decreasing nine-tenths of a cent to $5.357, its lowest amount since March 6.

The average price has decreased $1.016 since rising to a record $6.373 on June 15, including seven-tenths of a cent Friday, according to figures from the AAA and the Oil Price Information Service.

“We may see more relief at the pump as we move closer to the end of summer road trips, but a more significant decrease in demand for fuel will likely come after Labor Day weekend,” said Doug Shupe, the Automobile Club of Southern California’s corporate communications manager.

The national average price is 11.9 cents less than one week ago and 66.6 cents lower than one month ago, but 77.9 cents more than one year ago.