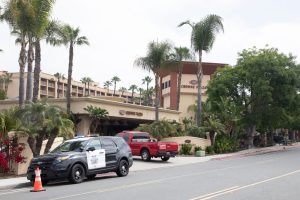 The Crowne Plaza hotel in Mission Valley, which the county used as an isolation center for people with COVID-19 symptoms who have no other place to go. (Zoë Meyers/inewsource)

San Diego County officials spent more money on security guards at a COVID-19 hotel shelter than they did on food for people who were isolated there while sick, according to an inewsource analysis of invoices.

And newly obtained information shows the meals provided to quarantined guests came from restaurants that have been cited multiple times by county health inspectors for food handling and storage violations, in some cases potentially serving hazardous food.

These records, while incomplete, offer the clearest picture yet of who provided services and what it cost to operate the Crowne Plaza in Mission Valley — the main hotel used to temporarily house people who came in contact with the coronavirus and had nowhere else to isolate. Many were unhoused and struggling with mental illness or substance use disorders.

Crowne Plaza guests, who were under a public health order to stay in their rooms, sometimes faced harassment and physical violence from security. At the same time, undercooked food, small portion sizes and unmet dietary needs meant some people went hungry. This was particularly difficult for those who were suffering with COVID-19 symptoms, according to a scathing review of the program.

In nearly two years, county officials paid Equus Workforce Solutions, the staffing agency that has faced scrutiny for its mishandling of the public health program, more than $103 million to run the Crowne Plaza. Invoices provided to inewsource show:

In comparison, the annual budget for security and food at San Diego’s largest homeless shelter is roughly $2.1 million each, according to the San Diego Housing Commission.