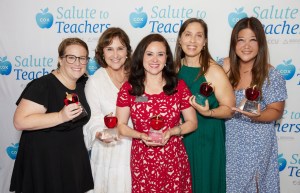 Five local educators representing schools in San Diego and North and South County have been named San Diego County Teachers of the Year.

Officials named the honorees Friday as part of the 32nd annual “Cox Presents: Salute to Teachers” presented in part by the San Diego County Office of Education (SDCOE).

Your first look at the 2023 San Diego County Teachers of the Year! Congrats to these 5, the 40 teachers we honored tonight, and all 24,000 educators in the county! #CoxSalute pic.twitter.com/SaOXU5vlkX

“The teachers we are celebrating here tonight are innovative in what they do and passionate about the students they serve,” said Dr. Paul Gothold, San Diego County superintendent of schools. “It’s an honor to be recognizing these amazing educators and individuals.”

The five Teachers of the Year will represent the county in the California Teacher of the Year program. The state winners will be announced next month.

In partnership with SDCOE, Cox will produce a one-hour television special to recognize local teachers, spotlight the Teachers of the Year, and share highlights from the reception. The show, hosted by Food Network personality and San Diego Magazine owner Troy Johnson, will air at 9 p.m. Oct. 2 on YurView Network (Cox Channel 4) and will be replayed several times in October and November.

The honorees were chosen from among 40 teachers nominated by their school districts. The winners were selected based on a review of their applications and interviews by a panel made up of former County Teachers of the Year, district and county office of education administrators, and a PTA representative.

They were chosen based on school and community involvement, teaching philosophy, knowledge of current educational issues and trends, promotion and development of the teaching profession, school culture and ability to serve as ambassadors of education.