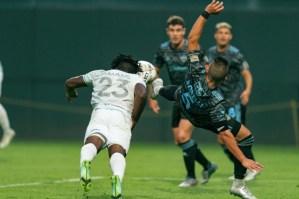 Vassell and Amang scored in the first half while Conway found the back of the net in the second to help SD Loyal continue its climb in the Western Conference standings. The win helped the team remain in second place with a 16-6-4 record and 52 points.

Vassell got SD Loyal on the board in the 17th minute, finding the net for a team-leading 12th time this season. He sent in a left-footed shot, beating El Paso goalkeeper Evan Newton.

Why make many pass when one pass do trick? pic.twitter.com/jzPdJSdFb1

The goal also topped his personal best for scores in a single season in his professional career. The striker logged 11 for English side Blackpool in 2016-17 and again in 2017-18.

Amang extended the SD Loyal lead to 2-0 in the 43rd minute when he sent a shot past Newton off a Charlie Adams pass. It was Amang’s ninth goal of the season and Adams’ sixth assist of the year.

El Paso (10-11-7, 34 points) found the net when Dylan Mares bent a corner kick over the Loyal defense and goalkeeper Koke Vegas to cut the visitors’ lead in half.

Conway gave SD Loyal a cushion in the 76th minute. The Wisconsin native found the net off a header on a set piece by Adams. It was Conway’s seventh goal and Adams’ team-leading seventh assist of the season.