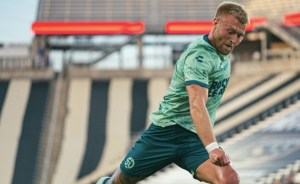 San Diego Loyal SC allowed a first-half goal Saturday, but that was all Birmingham Legion FC needed at home to secure the club’s 13th win.

The loss snapped the five-match win streak for SD Loyal (15-6-4, 46 points) ahead of their next game, again on the road, against El Paso Locomotive FC on Aug. 20. The team, though, has some time to breathe after playing in its third match in eight days.

Juan Agudelo scored the game’s lone goal in 20th minute of the match at Protector Stadium, heading in a corner kick from Prosper Kasim and sending the ball just inside Loyal goalkeeper Koke Vegas’ right post. Vegas could only stand and watch.

Birmingham (13-6-5, 44 points) pressure SD Loyal and nearly scored twice more, including a dangerous shot by Marlon Santos. Vegas had to slide and in front of the charging forward to block the shot just before halftime.

In the second half, Santos nearly had another goal, as he sent a right-footed shot off the crossbar in the 66th minute.

SD Loyal push for the tie in the second half with one chance coming when second-half substitute Tumi Moshobane slid for a ball in the six-yard box and tried to get a shot off. But Birmingham Legion FC goalkeeper Matt Vanoekel managed to get in the way.

A stingy Birmingham defense hunkered down on its side of the pitch to offset the Loyal rally and protect the shutout.

“We weren’t great on the night,” coach Landon Donovan said. “(We) probably didn’t create quite enough chances to break through.”

SD Loyal fell for the third time this season on the road, but still has gone 9-3-0 in its last 12 matches, to earn 27 of 36 possible points.