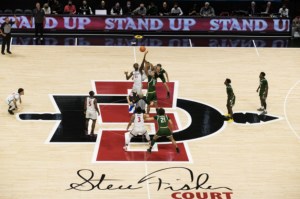 If the Aztecs defeat the Buckeyes, they would face the winner of the Arizona-Cincinnati first-round game Nov. 22 in a championship semifinal, while a loss would have them play the Wildcats-Bearcats loser Nov. 22 in a fifth- place semifinal. San Diego State will conclude tournament play Nov. 23.

The Aztecs, Ohio State and Arizona are among six teams in the eight- team field that played in the 2022 NCAA men’s basketball tournament, along with Creighton, which defeated San Diego State in a first-round game, Arkansas and Texas Tech.

The Aztecs will be making their fifth appearance in the Maui Invitational and first since 2018.

The Maui Invitational will be played at its customary site of the Lahaina Civic Center in Lahaina, Hawaii for the first time since 2019. It was played in Asheville, North Carolina in 2020 and the Las Vegas Strip in 2021 because of the coronavirus pandemic.