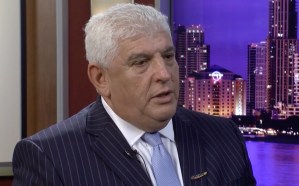 The San Diego Association of Governments’ CEO Friday thanked local elected leaders for their help securing funding for transportation projects in the county, including more than $300 million to move train tracks off the Del Mar Bluffs.

SANDAG CEO Hasan Ikhrata said the funding could advance many of the regional transportation agency’s ambitions.

“Between the state’s historic transportation investments and the new federal infrastructure funding, SANDAG has an unprecedented opportunity to move many of our priority projects — like the LOSSAN Realignment, Otay Mesa East Port of Entry and Central Mobility Hub — forward,” he said, specifically thanking Senate President Pro Tem Atkins and Sen. Ben Hueso, both D-San Diego, for their work in securing the funding.

“Building a better future for all, we’ll continue to model what progressive and responsible governance can look like, the California way,” Newsom said.

Besides the biggest investment in the $300 million for the LOSSAN rail realignment project in Del Mar, SANDAG also is slated to receive $20 million to pay down bond balances.

Construction crews in mid-June completed emergency repairs to stabilize the Del Mar Bluffs, but additional work is slated to begin next year.

The bluffs experienced a partial collapse in February 2021 and emergency repairs consisted of the installation of additional piled support columns to stabilize the train tracks in the collapse area, slope repairs, drainage improvements, bluff toe protection and revegetation planting and hydroseeding of the slope,

The LOSSAN rail corridor is the second-busiest intercity rail corridor in the United States, serving 7.6 million passengers and moves $1 billion in goods and services each year.

The bluffs typically experience erosion of up to six inches per year on average over the last 25 years, largely due to storm water, wave action irrigation runoff and sea level rise.

SANDAG and NCTD were seeking this additional funding to expedite the planning process to move the tracks inland as a long-term strategy to increase the reliability of passenger rail service.