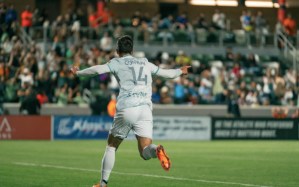 Nevertheless, the home team made it difficult for SD Loyal to find a rhythm early on, as Orange County (5-10-7, 22 points) opened the scoring 10 minutes into the match.

Milan Iloski sent a right-footed shot past SD Loyal goalkeeper Koke Vegas for a 1-0 lead. Iloski got his own rebound off a block, moved around in the box and found an angle for his shot.

Stoneman scored 30 minutes later, tying the match 1-1 off a corner kick by Charlie Adams. The floating corner found a jumping Stoneman open inside the six-yard box.

Iloski added his second goal of the night after giving a short pass to Seth Casiple who immediately gave it back. Iloski spun around and slotted a left-footed shot to the upper corner of the net to give Orange County the 2-1 lead, but it didn’t last long.

Amang tied the match 2-2 four minutes later with a header into the roof of the net. The striker sent in a bending cross from Adams for his eighth goal of the season.

Conway got the game winner in the 85th minute, burying a left-footed shot into the upper left corner after an Orange County defender deflected Amang’s attempted through ball.

SD Loyal have scored in 20 of their 22 games this season, more than any other team in the USL Championship.