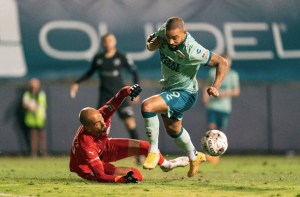 Kyle Vassell was part of SD Loyal’s late push, but it fell short in a 3-1 home loss. Photo credit: @SanDiegoLoyal, via Twitter

Conway scored in the 24th minute of Wednesday’s Week 25 USL Championship matchup, but Oakland answered back with two first half goals and a third late.

But the lead didn’t last long. Juan Carlos Azocar tied the match 1-1 when he brought down a cross by Charlie Dennis and sent it in with his left foot, beating Loyal goalkeeper Koke Vegas in the 28th minute.

Emrah Klimenta scored the game-winner 10 minutes later for the 2-1 lead.

Oakland (7-7-12, 33 points) held off a charging SD Loyal team after the break. Vassell, Conway and Tumi Moshobane each had chances that forced Blanchette to make standout saves.

The team continued to pressure and rallied late, but Oakland withstood the surge and ultimately sealed the win with an Edgardo Rito goal on a counter attack in the 88th minute.

“It’s a good reminder that on any given day, you don’t make all the little plays, then you can lose,” coach Landon Donovan said.

SD Loyal (16-7-4, 52 points) next hits the road for a Sept. 3 match against Monterey Bay FC. The squad remains in second place in the Western Conference as it vies for a top spot in the playoffs.