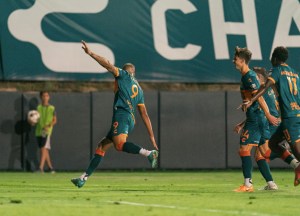 Evan Conway, Grant Stoneman and Kyle Vassell scored for SD Loyal (​​14-5-4) in the clash as the team earned three more points to move within four of San Antonio at 50.

After a scoreless first half, San Diego came out looking to attack, pressuring a tired-out San Antonio (16-4-2) team.

“We could tell in their body language coming off the field at half time that they were spent,” said coach Landon Donovan. “They had done so much running and we just wore them down.”

Still, the scoring didn’t begin until after the 62nd minute, when Tumi Moshobane and Kyle Vassell came on as substitutes.

Conway opened it up when he put back his own blocked shot for his sixth goal this season. The forward got his head on a deflected cross but San Antonio goalkeeper Jordan Farr blocked the shot.

The rebound shot back to Conway, and he capitalized on the opportunity, giving the Loyal a 1-0 lead.

Stoneman made it 2-0 when he headed in a bending cross from Alejandro Guido that deflected off a San Antonio defender in the 72nd minute.

Vassell scored his team-leading 11th goal of the season five minutes later with a right-footed shot from near the top of the box on an assist by Nick Moon. Farr got a finger on it, but could not stop it.

With the win, SD Loyal earned its seventh victory in eight matches. The team remains at home and will seek a Loyal record fifth consecutive win against expansion club Monterey Bay FC at 7 p.m. Wednesday.