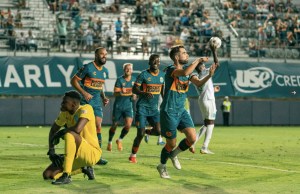 SD Loyal celebrates on the way to their 1-0 home win. They improve to 6-1 at Torero Stadium on the season. Photo credit: @SanDiegoLoyal, via Twitter

Adams’ team extended its winning streak to five matches for the first time in club history in the win, which kept them close to first place San Antonio FC in the Western Conference standings.

SD Loyal has now won eight of its last nine, while going 6-1 at home. The squad outscored its opposition 16-2 during those six wins.

The 4,114 in attendance at Torero Stadium began celebrating in the 59th minute Wednesday after Adams gave SD Loyal the 1-0 lead. The team captain converted the penalty kick when he blasted a left-footed shot down the middle as Monterey Bay goalkeeper Antony Siaha dove to his right. It was his fourth goal of the season.

SD Loyal (15-5-4, 49 points) nearly scored on a handful of occasions late in its first-ever match against Monterey Bay FC (8-12-2, 26 points), a team that came in riding a streak of five-straight shutouts.

But the visitors withstood the late Loyal surge and were able to keep the league’s top-scoring offense to one goal. That was thanks in part to Siaha’s key saves, including blocking a pair of powerful Jack Blake shots that came in a first half dominated by SD Loyal on possession.

Loyal goalkeeper Koke Vegas, in keeping Monterey Bay off the board, recorded his second-consecutive clean sheet.

Now the team faces its third match in eight days, traveling east to face Birmingham Legion FC on at 5 p.m. Saturday in the first-ever meeting between the clubs. The match will air on The CW San Diego, ESPN+ and Azteca America 33.