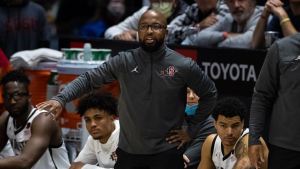 JayDee Luster, an assistant coach for San Diego State, has been inducted into the Hoover High School Athletic ‘Legends’ Hall of Fame.

“It’s an honor to be inducted,” Luster said, “and not just for myself, but for my family and everyone who has helped me along the way. They say, ‘it takes a village’ and this honor certainly proves that. I’ve been blessed to be surrounded and mentored by people who saw something in me that I may not have, and it was great to be able to celebrate this achievement with them and to show my appreciation for all they have done for me.”

The 2007 graduate of Hoover High was a three-time high school all-American in basketball.

He completed his prep career as the school’s all-time leader in assists (857) and steals (559) and scored 1,890 career points. Student Sports Magazine selected him as an All-American, while he garnered several other honors – three-time all-state honoree, two-time Central League Player of the Year, four-time All-Central League designee and 2004 California Freshman of the Year.

He played college ball at New Mexico State for one year. He then transferred to Wyoming, where he became the 2012 Mountain West Defensive Player of the Year.