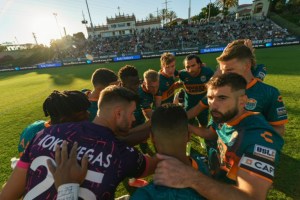 Loyal FC came together Saturday, but Galaxy II proved to be too much for them. Photo credit: @SanDiegoLoyal via Twitter

San Diego Loyal FC suffered a setback at the hands of Los Angeles Saturday as Galaxy II pummeled them at home 5-0.

The team fell to Los Angeles for the first time in almost two years as they opened a three-game stretch at Torero Stadium.

They played 79 minutes with 10 men and it showed as Galaxy II’s Cameron Dunbar and Preston Judd both scored a pair of goals in the USL Championship Week 18 match. With the loss, Loyal FC’s three-game winning streak ended, as the team fell to 10-5-4. Galaxy II improved to 9-8-3.

Dunbar scored his goals in the 13th and 31st minutes, while Judd added his in the 22nd and 59th.

Dunbar converted a penalty kick with a low-rolling shot to the right of Loyal goalkeeper Koke Vegas to open the scoring. LA was given a penalty kick after defender Kyle Adams was whistled inside his own six-yard box.

Adams was presented with a straight red card, putting SD Loyal a man down for the majority of the match.

Galaxy II extended the lead to 2-0 when Judd sent a shot into the roof of the SD Loyal net after a ball deflected off his teammate. Los Dos added its third when Dunbar chipped in a long cross by Judd for his second goal of the night.

SD Loyal came out pressuring after the break, trying to end the shutout. But Judd added his second goal of the night when he sent in a pass by Michael Salazar from left to right for a 4-0 lead.

SD Loyal even had to endure an own goal as defender Nikko Boxall slid to try and stop a rolling cross by Owen Lambe in the 81st minute.

Meanwhile, earlier this week, Alejandro Guido made the USL Championship Team of the Week for the second time this season. The Chula Vista native helped SD Loyal to a 2-1 win against Orange County SC in a Week 17 match on June 29, scoring a pair of goals.

The attacking midfielder has started 17 matches this season, playing in 1,363 minutes and recording three assists.