Snell Continues Roll, Striking Out 10 in Padres’ Shutout of Nationals 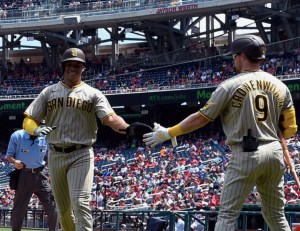 Juan Soto and Jake Cronenworth had reason to celebrate Sunday as the Padres took care of the Nationals 6-0. Photo credit: @Padres via Twitter

The Padres completed their first series after the bombshell news of Fernando Tatis Jr.’s suspension, taking two of three from Washington with a 6-0 win Sunday.

Manny Machado and Wil Myers led the way with two RBIs each as Blake Snell went six innings, striking out 10.

He also continued his mid-season hot streak, improving to 5-6 – after starting the season with no wins and five losses. Manager Bob Melvin told MLB.com it’s been “quite a roll” for Snell.

“He has been as effective a guy as we have had here, if not the best, in the last month, month and a half,” Melvin concluded.

The Friars played small ball against the Nationals with no home runs, but it worked. Myers opened up the scoring in the second with a two-out double to bring in Jake Cronenworth, who had walked. They added two the next inning on a Machado single and a Brandon Drury force play.

Myers’ second RBI came on another two-out hit, this time a sixth-inning single to score Trent Grisham. Machado drove in his second run in the ninth, as Myers crossed the plate on his single. An error on the play also allowed Jorge Alfaro to score.

Juan Soto finished the weekend with four hits in 12 at-bats, two RBIs and four walks. This was his first weekend back in Washington D.C. after the mega-deal that brought him to the Padres at the Aug. 2 trade deadline.

The Padres have a busy week ahead and they cap it by seeing the Nationals again. They move on to Florida to face the Marlins for three – Joe Musgrove, Sean Manaea and Mike Clevinger get the starts – before returning home Thursday to host Washington.