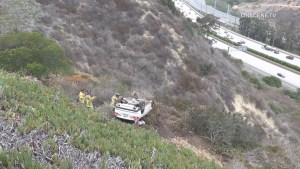 Firefighters examine the wrecked BMW after the victim was airlifted to a hospital. Courtesy OnScene.TV

A speeding BMW went over the side of a freeway embankment near San Clemente Canyon in La Jolla Wednesday, leaving its male driver seriously injured.

The crash occurred around 8:10 a.m. on the ramp from northbound Interstate 5 to La Jolla Parkway, according to San Diego Fire-Rescue personnel at the scene. It’s unclear what caused the driver to go over the embankment.

A helicopter was deployed to help reach the vehicle, which came to rest on its roof. The unconscious victim was airlifted to Scripps Memorial Hospital in La Jolla.

The northbound ramp from I-5 to Route 52 at the interchange was expected to be blocked for an unspecified duration while the rescue operation continued.

City News Service and OnScene.TV contributed to this article.