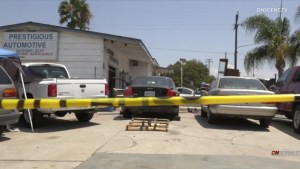 A predawn stabbing in a neighborhood just east of San Diego Bay left a 69-year-old man dead Monday and a woman under arrest on suspicion of murdering him.

Aided by a witness who described seeing the suspected assailant fleeing to the north, officers searched the neighborhood and found the woman, later identified as 40-year-old Samantha June Gordon of Spring Valley, on the grounds of an auto dealership and took her into custody.

Police did not release a suspected motive for the stabbing or disclose the relationship, if any, between the suspect and victim.