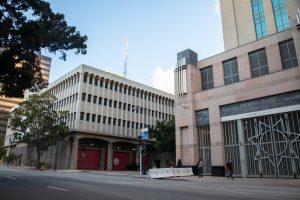 The Board of Supervisors unanimously approved an emergency measure Tuesday aimed at addressing the number of drug overdose deaths in San Diego County jails.

Proposed by board Chairman Nathan Fletcher, the measure includes $200,000 for body scanner technology to intercept and stop drugs such as fentanyl from being brought into the jails.

The measure includes expediting staff incentives and strategies included in an employee compensation ordinance also passed Tuesday, exploring new strategies for care and safety, including additional wellness teams and expanded access to medication-assisted treatment, and the purchase of an additional body scanner, with the option for eight more over the next five years.

We must do everything we can to prevent drug use in our jails and prevent deaths. The policy we passed today will take important steps to support the Sheriff’s Department as they work to make changes in our jails. pic.twitter.com/5fzAlRpbJQ

Supervisors will receive a report on how the measure is working in 60 days.

Tuesday’s action comes in the wake of growing criticism over the number of overdose-related deaths in county jails. According to the county, there have been 15 such deaths so far this year, with five in July alone.

Supervisor Terra Lawson-Remer said the county is facing a crisis in its jails and has been for a long time, “but this July has been devastating.”

In a statement after the vote, Fletcher said it “has been difficult for the sheriff’s department to hire medical staff in our jails to help address drug overdoses and deputies to protect and serve because these are hard jobs.”

“We believe the incentives we approved will help to accelerate hiring, and allow us to more quickly rehabilitate the people in custody,” Fletcher added.

The compensation ordinance serves a companion policy to the emergency measure “because together they deliver more tools and staffing to help save lives and strengthen the department’s ability to remove fentanyl and other drugs from county jails,” Fletcher said.

In October 2019, Fletcher requested a review of best practices of jail operations, along with a compilation of recommendations to improve the system.

In June 2020, he introduced a proposal giving greater authority to the Citizens’ Law Enforcement Review Board for increased civilian oversight of jail operations.

In March, supervisors voted to accept a state audit that outlined concerns and recommendations for care provided in county jails.